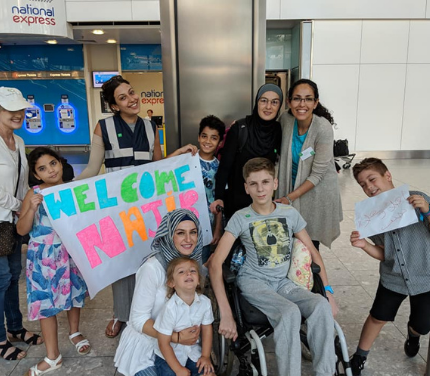 We’d like to introduce you to an incredibly courageous and resilient young man; his name is Najib.

Najib was only 10 years old when his family home in the Syrian city of Homs was hit in an airstrike in 2013. He was declared dead and about to be buried when his mother caught a glimpse of his heart beat when she thought she was touching his ankle one last time to say goodbye.

The violent impact of the airstrike left Najib with a very serious injury to his spine, which was causing damage to his organs. We were told that unless Najib was operated on, his kidneys would fail, which would then have disastrous effects on his lungs. His situation was incredibly perilous.

Since then, we have done everything we can to help Najib and his family. Thanks to the generosity of our donors, we were able to bring the family to the UK so that Najib could receive a medical assessment at Great Ormond Street Hospital for Children.

After 18 long and anxious months of waiting, Najib’s spinal reconstructive surgery took place on 1st November 2018 at Great Ormond Street, after which he underwent rehabilitation treatment. Thanks to the generosity of our donors, Najib was also able to recieve private healthcare in the UK and undergo life changing treatment. With his health restored, he now has the chance of a brighter future, which he so deserves.