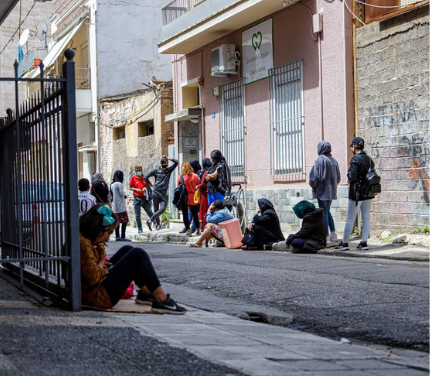 “They stayed at the border for one year and finally managed to cross into Turkey, leaving behind the life and dreams they worked so hard to build.”

Jamal was a university student in Syria, studying law. Dreaming of becoming a well-known lawyer, like his father, Jamal would always be the first student to arrive at his classes. He knew what he needed to do to achieve his goal and he was determined to work hard along the way.

In 2015 Jamal got married to Amira, and in time they welcomed their first child into the world. Worryingly, the situation in Syria was getting worse every day. Jamal could see his beloved family were in danger as the violence was getting worse and worse. He prayed for their lives whenever he left their house, scared it might be the last time he saw them. He began to fear that they would all have to flee the country in order to survive,  but he desperately wanted to stay so that he could care for his and Amira’s elderly parents.

At the end of the year their second child was born; this was when they knew that they had to leave Syria. It was exceedingly difficult for them to find safety and security for their kids; they could no longer risk their lives to stay in the country they loved. Jamal worked numerous jobs day and night to raise enough money to enable a move to Europe.

After a year of saving, they managed to begin their journey, travelling to the border with Turkey. They tried to cross, carrying their two babies, but they could not make it. They stayed at the border for one year and finally managed to cross into Turkey, leaving behind the life and dreams they worked so hard to build.

When Jamal was in Turkey, he discovered that the only way to cross to Greece was by boat. Left with little choice, they were forced to risk everything and board a boat to the Greek Island of Samos.

Thankfully, they arrived safely and, after some time, they moved to Thiva camp on the main land, which is far away from Athens city centre. They have had no choice but to remain in Thiva camp for the past 3 years, waiting for refugee status, which has not yet been granted to them.

Amira, Jamal’s wife, has recently given birth to a baby boy. Whilst in the camp, they were told that Amira was going through a difficult pregnancy and some complications might arise during the birth of the baby. Jamal heard about Goodwill Caravan from a friend. He told him about all the work that we do to assist and care for families like his. Jamal contacted our medical office and explained the precarious situation Amira was in. Within seven days, we ensured that the family were relocated to a hotel in the centre of Athens by covering emergency shelter for the family, so Amira could give birth in the hospital in case any complications arose.

On the 3rd of June Jamal & Amira welcomed their beautiful newborn son into the safety of a hospital. They will be moving back to the camp to continue with their asylum procedure.

We wish their new baby, Ali, a healthy life!